“Through this Movement, I am calling all my children to consecrate themselves to my Heart, and to spread everywhere cenacles of prayer.” (473 i: May 13, 1992) 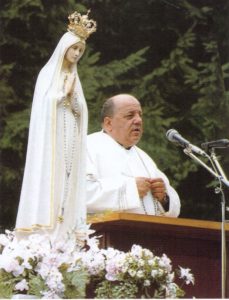 Don Stefano Gobbi was born in Dongo (province of Como, in Italy) on March 22, 1930. He was ordained in 1964, and belonged to the Society of St. Paul founded by Fr. Alberione.

The turning point of his life, however, came on May 8, 1972, during a pilgrimage to Fatima, when the Virgin Mary began to speak to him distinctly in that form which Christian spiritual theology defines as “inner locutions”. Mary invited him to gather together those of his brother priests who welcomed the idea of ​​consecrating themselves to Her Immaculate Heart, and of being profoundly united to the Holy Father and to the Church united to him. Mary confirmed her request of him in a sign he received later that same month in the shrine of the Annunciation in Nazareth.

Fr Gobbi continued to receive messages from the Virgin for the rest of his life, receiving more than 600 messages that have been published and disseminated throughout the world in a book entitled “To the priests, beloved children of Our Lady” – a book we now commonly refer to as “the Bluebook”. This book has received numerous episcopal endorsements and numerous imprimatur, including those of the cardinals Bernardino Echeverria Ruiz ofm, Ignatius Moussa Daoud and Jean-Baptiste Wu.

Don Gobbi had a close relationship with Pope St. John Paul II, who for several years invited him to celebrate Mass with him in his private chapel, and closely followed the activities of the Marian Movement of Priests.

While preparing for the annual International Spiritual Exercises of the MMP priests at Collevalenza, Fr Gobbi suffered a heart attack and died a few days later, on 29 June 2011 on the solemnity of Saints Peter and Paul and the day on which Pope Benedict XVI celebrated his 60 years of priesthood.

Fr Gobbi’s funeral Mass was celebrated in Collevalenza in the midst of his brother priests. The Mass was presided over by Cardinal Ivan Dias. Fr Gobbi was buried in his native village of Dongo on Saturday 2 July, the feast of the Immaculate Heart of Mary.